For our kids, we present this article about The Life of Prophet Muhammad for Kids
These are Islamic flashcards about biography our messenger, besides to learn children and the whole world who our prophet Mohammed?

Muslims believe he is a messenger and a prophet of Allah (God). He is believed to be a descendant of Ishmael, a son of Abraham alihema alsalam, and the last of all prophets (the seal of the prophets). He is seen as an example for all Muslims to follow 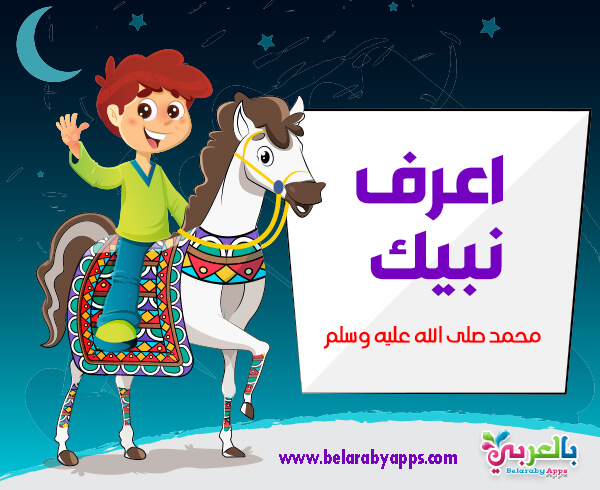 The Life of Prophet Muhammad for Kids, Islamic flashcards

In the last this article  you get free pdf file ” Islamic flashcards about our prophet’life, his childhood….. so on ”

Images for kids to print it and use it as tools for learning at homes, kindergarten, and schools.

Also, we can use stories about Alsira to tell our children about the prophet’s life and his manners with Muslims and another 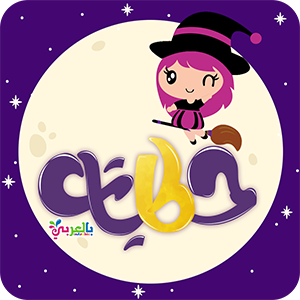 
Biography of the Prophet for children

Prophet ratios of God be upon him 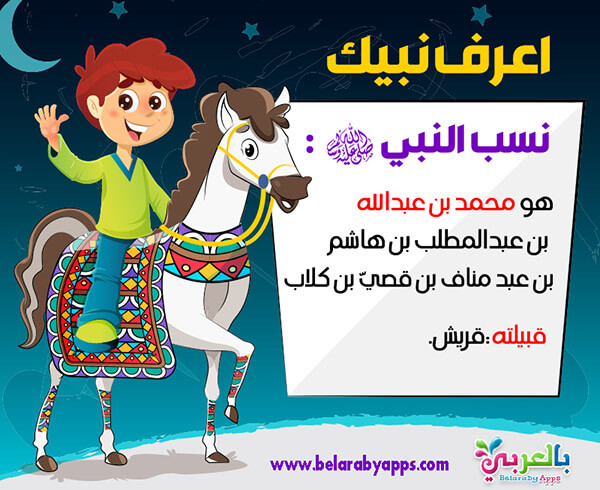 Birth and life of Prophet Muhammad

Muhammad was born about 570 AD in Mecca. His father, whose name was Abdullah, died six months before Muhammad’s birth. His mother, Amina, died when he was six years old. So, his grandfather, Abdul-Muttalib, took care of him after the death of Amina but he too died two years later when Muhammad was nine. After his grandfather’s death, his uncle Abu Talib took care of him and was a support to him for many years of his adult life. 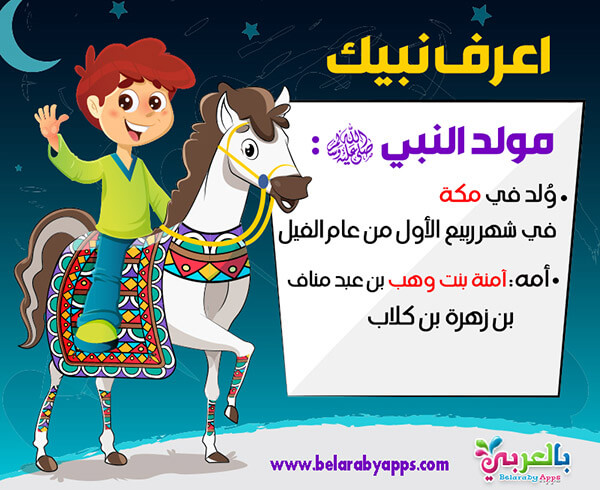 Breastfeeding of the Prophet in the desert of Bani Saad 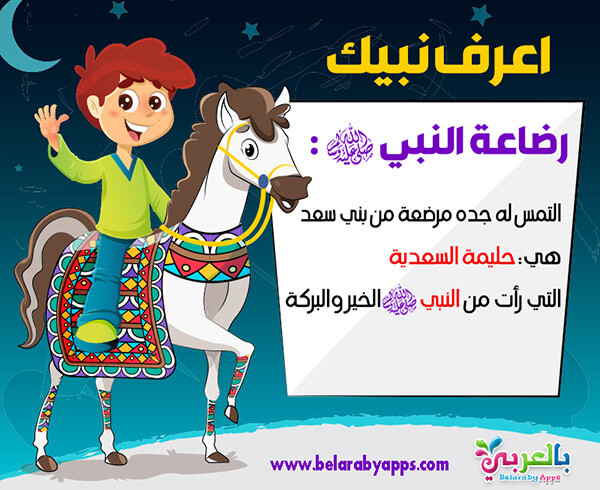 The Prophet takes care of the sheep

Muhammad worked mostly as a merchant, as well as a shepherd, and married Khadijah when he was twenty-five. 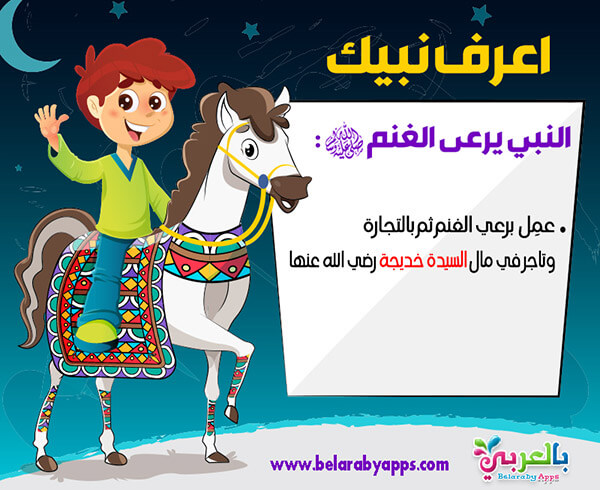 Mohammed called Alsadek Alameen because he had a good manners when he was a child , 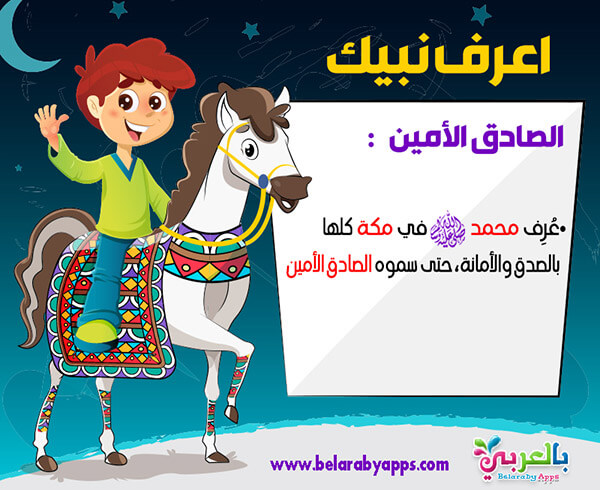 The Story about prophet’s manners 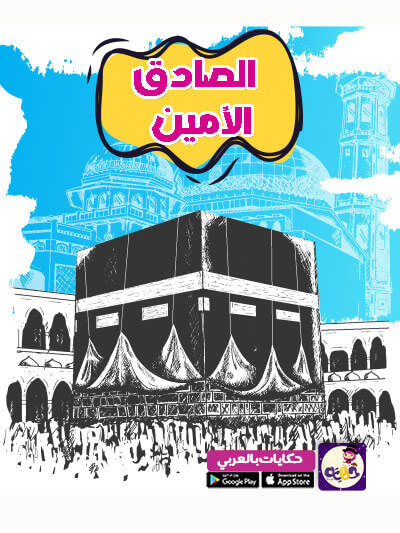 The Beginning of the prophethood

when Muhammad was forty years old, he went for a walk to the mountain of Hira near Mecca. According to Muslims, the angel Jibrail (Gabriel) spoke with him in a cave on the mountain. The story says that when Muhammad first saw the angel Gabriel, he fainted, because Gabriel was so large.
Muhammad went back home to his wife Khadijah and told her what had happened. New revelations came to him commanding him to preach what was being sent down from God.

♥ You read a story about the Beginning of the prophethood 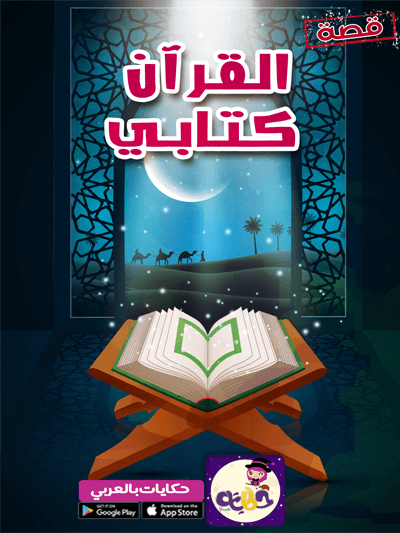 Information about Prophet Muhammad in English

then, our prophet told about Allah in annonce

After Muhammad finished in Mecca, he took his message to Medina, where some people learned about him and his followers. They welcomed him into their city, and Muhammad wanted them to convert to Islam. They agreed, and many of his followers went to Medina. This movement from Mecca to Medina is called the Hijrah. The Hijra was also the beginning of the Islamic calendar. Muhammad stayed behind until all of his people left Mecca safely.

As Muhammad stayed in Mecca, his uncle Abu Lahab trained seven men to kill Muhammad in his sleep. According to history, they did not see him leave Mecca. The men went into his house and found his cousin, Ali. Abu Lahab and his horsemen went to the desert to look for him and his friend, Abu Bakr.

♥ You may like: Free !- Printable Islamic (Hijri) Months Flashcards

He conquered twenty-seven expeditions and fought in nine of them.

Hajj of the Prophet, peace be upon him

♥You may like: the Islamic new year 1442 Hijri images, Greeting cards

In 11 Higrya, on Rabiaa Awal 12, Muhammad became very sick. Before he died, he told his followers about his death. He is buried in the chamber of his wife Aisha in Medina, where the Masjid al-Nabawi (Mosque of the Prophet) is. In Medina, his friend Abu Bakr went to the Masjid al-Nabawi and shouted to the people:

“If any of you worship Muhammad, you should know that Muhammad is dead. But those of you who worship Allah(SWT) (God), let it be known that Allah(SWT) (God) is alive and cannot die.”

Although Muhammad died, Islam soon spread all over the Middle East. Then, centuries later, it continued till it reached Africa, Asia, and Europe. Islam has become one of the world’s biggest and fastest-growing religions

Our prophet said that

In another Hadeeth said also :

The Life of Prophet Muhammad for Kids, Islamic flashcards pdf

To download this Free Printable Math Games For Kindergarten you can press on the link below so, you can print it for free in a PDF version.

Download free Islamic flashcards about our prophet’s history into pdf

To read more about Islamic stories and a lot about the prophet Mohammed..you follow our page (Belaraby nataalam) 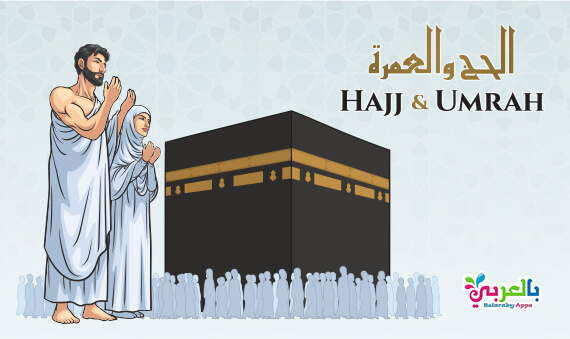 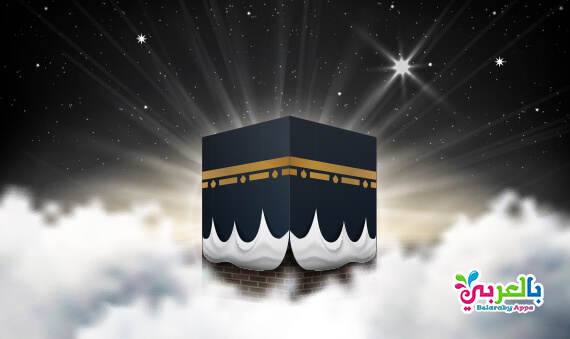 I love your website and this is very solid advice!

Hi it’s me, I am also visiting this web page regularly, this
web site is actually pleasant and the viewers are actually sharing good thoughts. 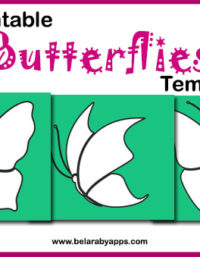 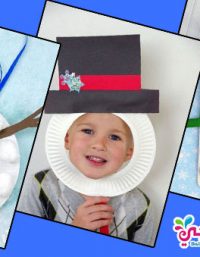